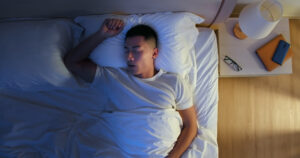 The mattress company Eve Sleep has called in administrators after succumbing to what its chief executive described as an “economic tsunami”.

The company, whose share price has slumped more than 90% this year, said it had received a number of indicative offers from potential buyers but none had progressed beyond due diligence.

“It is heartbreaking to have to acknowledge that the best way to preserve value for creditors, those partners and suppliers that have helped us on this journey, is to now terminate the formal sale process and appoint administrators,” the chief executive of Eve Sleep, Cheryl Calverley, said.

Calverley said the business, which operates in the UK, Ireland and France, had tried to restructure and reduce its cost base but lacked the scale to continue as an independent business.

“The scale of Eve was simply insufficient to withstand the economic tsunami that has gathered momentum over the past six months,” said Calverley. “We have moved heaven and earth to seek a way forward as an independent or acquired business, but ultimately prevailing market conditions just do not support that.”

The failure of Eve Sleep comes as the online furniture retailer Made.com said it has entered talks with a number of companies with the aim of securing a rescue deal by the end of the month.

Last month, the company, which has increasingly struggled as cash-strapped consumers stop spending on “big ticket” items, cut more than third of its staff and kicked off a process to find a buyer or emergency investment.

“The board of Made.com has received a number of non-binding indicative proposals,” the company said. “Having reviewed these proposals the board has invited a select number of parties to progress towards firm offers by the end of October, following a due diligence process.”

The company, which floated on the London Stock Exchange last year, said that due to the parlous state of its finances any deal would require any prospective buyer to provide interim financing at the offer stage to keep Made.com running.

“Based on the working capital requirements of the group, any firm offer would require interim financing to be put in place at the time that firm offers are expected, which the parties involved in the process are aware of,” the company said.

Since the start of the year, the London-based Made.com has implemented measures to attempt to preserve its finances, including limiting forward purchasing of inventory, implementing a hiring freeze, halting marketing spend and reducing capital expenditure.