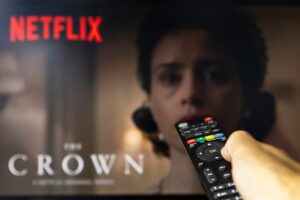 Almost 1m British households have given up on the streaming revolution so far this year, as the cost of living crisis forces increasingly budget-conscious consumers to stop taking services such as Netflix, Amazon Prime Video and Disney+.

The premiere of two of the most-hyped and expensive shows of all time – the $650m (£580m) productions of Rings of Power and House of the Dragon – failed to prove a big enough draw to reverse a decline of another 234,000 homes with at least one paid streaming service in the third quarter.

The total number of UK homes that have at least one paid-for subscription has fallen by 937,000 between January and September, as cost-conscious households choose paying for essentials – such as energy, food and mortgage repayments – over home entertainment.

“The reason people are cancelling is the need to save money. The most recent quarter saw two of the most anticipated releases of the year, they ranked as the top two most enjoyed pieces of subscription video-on-demand content during the period, and yet we still saw a continuation of the negative trend of the market getting smaller.”

Just over 16m British homes now pay for at least one subscription video-on-demand service according to Kantar Worldpanel. More than 5m homes have the three most popular services – Netflix, Prime Video and Disney+ – which together cost about £300 annually, according to media regulator Ofcom.

The report highlights the struggle that Netflix, which is to launch a low price ad-supported tier in a dozen countries in November, faces to revive growth.

The world’s biggest streamer, which has cut staff and become more disciplined with its $17bn annual content budget after earlier this year reporting its first subscriber declines in a decade, is forecast to add just 1 million new signups globally when it reports third quarter figures on Tuesday.

In the UK, Netflix accounted for almost a quarter of all UK households that changed or scrapped their streaming service in the third quarter, with 45% of those dropping out of the paid-for streaming market altogether.

The launch of Paramount+, home to content such as Star Trek: Strange New Worlds, Yellowstone and Halo, helped drive up the total number of paid-for streaming subscriptions overall in the UK by 108,000 to 28.2m in the third quarter.

The growth figures are somewhat flattered by Paramount+ being offered for free to all Sky TV customers who have a cinema package as part of their pay-TV bundle.

Nevertheless, Kantar’s figures show that while Prime Video, Paramount+ and Disney+ accounted for the vast majority of new streaming on demand subscribers in the third quarter – 29.4%, 24.6% and 17.5% respectively – Netflix continues to struggle.

The company took just a 2.1% share of new subscribers over the three-month period, a fifth of the proportion for the same period last year, with only ITV and the BBC’s BritBox service faring worse.

Netflix is hoping that its new £4.99-a-month Basic with Ads package, which will launch in the UK on 3 November, will attract a new wave of sign ups by cost-conscious consumers.

“Generally speaking Netflix loyalty has held up relatively well in a pretty tough market, but it is starting to see churn levels rise,” said Sunnebo.

“But the biggest problem Netflix is really struggling with is attracting new subscribers. Netflix needs to gain new customers, not just manage to stop them leaving.”

Overall, the report identified signs of stabilisation in the UK market in the runup to Christmas, with the number of cancellations in the third quarter well down on the peak of 488,000 recorded in the second quarter.

And the proportion of consumers planning to cancel streaming on-demand services stating the primary reason as “wanting to save money” is forecast to drop to 35% in the Christmas quarter, down from an all-time high of 38% in the first quarter. However, this remains much higher than the 24% recorded a year ago by Kantar.

“Consumers looked to have reached a stage where they had mostly cut the services they needed to cut and could manage that,” said Sunnebo.

“But what we have seen over the last few weeks and the impact on people’s finances means there may be more downward pressure in the final quarter this year.”