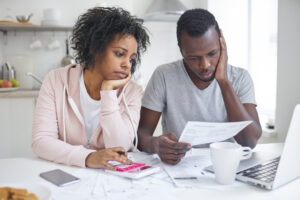 Energy regulator Ofgem has been threatened with legal action if it fails to protect vulnerable customers from soaring energy bills.

The Good Law Project has teamed up with anti-poverty groups urging it to ensure people can cope with bills, expected to reach upwards of £4,000 a year.

This comes as the energy price cap is set to be lifted to more than £3,500 in October, with many energy producers like BP and Shell are likely to rake in thousands.

On Tuesday, a survey by Ipsos found that 66 per cent of people think the Government is not providing enough help as rising energy bills surge back into the headlines, while under a third think current measures are about right or too much.

Meanwhile, more pressure was piled on the government after a Opinium  poll from 38 Degrees, found 86 per cent of the public, and 86 per cent of Tory voters, backed Labour’s plan to freeze energy bills.

The GLP has together with Fuel Poverty Action and the Chair of the Highlands & Islands Housing Associations Affordable Warmth Group, sent a formal pre-action letter to Ofgem.

The letter calls on it to protect vulnerable groups from the rising bills, ahead of an increase to the energy price cap due for 26 August.

Jo Maugham, director of the GLP said “Ofgem has the power to protect vulnerable people from the devastating increases in energy costs and we think they should use them.

“Having failed to properly assess the risks, they don’t seem to be planning any steps to protect vulnerable groups. We hope we’re wrong and that Ofgem is doing all this behind the scenes. But we don’t want to wait for their 26 August announcement to find out – we’ve put them on notice that if they don’t properly comply with their legal duties before announcing the next increase, we’ll be ready to challenge it straight away.”

According to the GLP, Ofgem can impose a ‘social tariff’ for vulnerable customers, but so far hasn’t announced any plans to do this. It accused Ofgem of failing in its legal duty in not doing so.

This comes as energy companies have been making record profits despite almost half of the UK population now threatened by fuel poverty in October 2022.

Ofgem admitted earlier in the month there is a “risk that the price cap at this level could result in some suppliers being in a relatively healthy cash position.”

An Ofgem spokesperson said its “priority is to protect consumers and we know that people are currently under huge pressure as bills continue to rise.

“We will keep working closely with the Government, consumer groups and with energy companies on what further support can be provided to help with these higher prices.

“We can confirm that Ofgem has received a letter from the Good Law Project and we will reply in due course.”