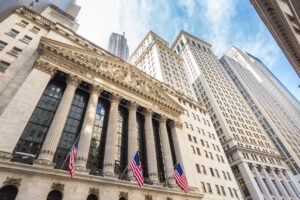 The US economy has officially plunged into recession in a sign of things to come for the rest of the world, figures published today revealed.

The American economy unexpectedly shrank 0.9 per cent in the three months to June, marking the second successive quarter the economy has contracted, meeting the common definition of a recession.

The fresh figures illustrate the scale of damage historic high inflation is wreaking on the world’s biggest economy.

Prices have climbed 9.1 per cent across the pond, the quickest acceleration since the early 1980s, stretching consumers and businesses.

America’s central bank, the US Federal Reserve, has responded sharply to soaring prices by hiking interest rates 225 basis points in just four months, among the quickest monetary policy tightening cycles since the 1980s.

Fed chair Jerome Powell said yesterday, in a press conference after the central bank lifted rates 75 basis points for the second month in a row, he does not think America is in a recession.

Higher rates have quashed consumer spending and reined in business investment, steering the US economy into reverse.

Americans’ responded to their spending power falling 0.5 per cent by reining in purchases, while monster rate rises sparked a 14 per cent drop in real estate investment as home builders curb spending amid falling housing demand.

Elevated borrowing costs “and surging inflation are weighing on underlying demand, and we expect only a muted rebound in economic growth over the second half of the year,” Andrew Hunter, senior US economist at Capital Economics, said.

The common definition of a recession is two successive quarters of falling gross domestic product. Last quarter, US output fell 1.6 per cent.

US statistics agencies analyse data over a wider time frame to determine if the economy is in recession.

Weakness in the US typically spills over to the rest of the world due to the country being stitched into the fabric of global trade and the dollar’s heavy influence on currency markets.

Analysts have warned the UK is on the brink of a recession, caused by households being crushed by a historic cost of living squeeze and businesses reining in production in response to higher interest rates and soaring costs.

Living costs are up 9.4 per cent, the quickest acceleration since 1982, prompting the Bank of England to raise borrowing costs five times in a row to 13-year high of 1.25 per cent.

Governor Andrew Bailey and the rest of the monetary policy committee could hike rates 50 basis points next Thursday, which would be the biggest move since the Bank was made independent 25 years.

The risk of Europe also falling into recession is extremely high. Inflation has raced to the highest rate since the creation of the euro in 1999, driven by Russia’s invasion of Ukraine propelling energy prices.

The bloc is heavily reliant on Russian gas supplies to generate output and heat homes, meaning a complete shut off of Russian supplies would deal a huge blow to its economy.

Gas flows through the Nord Stream 1 pipeline, a key thoroughfare that funnels gas from Russia to Europe, have plunged to a fifth of their optimum capacity.

The IFO Institute this week said Germany, the area’s economic powerhouse, is on the edge of a recession.

Read more:
US plunges into recession as rest of world braces for similar fate