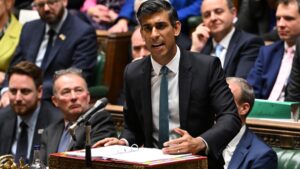 A rise in unemployment above pre-pandemic levels next year will intensify the squeeze on household finances, which is already at its worst since the Second World War, a think tank says.

The jobless rate has fallen from 4 per cent at the beginning of 2020 to 3.5 per cent after hundreds of thousands of people left the workforce during the pandemic. However, it is expected to rise above pre-pandemic levels as the country enters a recession caused by the cost of living crisis, forecasts show.

James Smith, of the Resolution Foundation, said: “Such an outlook means that as well as the new prime minister facing tough decisions, so too will many families as the cost of living [crisis] evolves into next year.”

Rishi Sunak is likely to raise taxes this month as the scale of the fiscal deficit cannot be plugged with spending cuts alone, the foundation says in a report.

The smallest level of headroom a chancellor has had against a new set of fiscal rules was equivalent to £12 billion, bringing the total scale of the fiscal tightening, whereby the government spends less and taxes more, to at least £40 billion.

The prime minister is under pressure as the weak economic outlook, rising interest rates and the remaining tax cuts made under Liz Truss put pressure on the government balance sheet. About £17 billion of the £45 billion unfunded tax cuts announced under Truss remain in place.

Debt rose to 98 per cent of GDP in September, up by 2.5 percentage points from a year earlier, according to the Office for National Statistics.

Inflation is at a 40-year high of 10.1 per cent, while economic growth has begun to contract. Economists fear the UK will enter a recession this winter as the squeeze on household budgets, weakening global consumption and the rising cost of borrowing eats into demand for goods and services.

The foundation said the Office for Budget Responsibility, will forecast a recession next year, knocking up to 4 per cent off GDP. The weaker outlook will raise borrowing by about £20 billion a year by 2026-27.

Smith added: “The government has a little over two weeks to finalise its plans to repair its economic credibility and the sustainability of the public finances. History tells us that this will involve cuts to public investment, which are easy to announce but reduce growth in the longer term,” Smith said, adding that further austerity for public services is likely. “This reality means that the autumn statement is likely to involve tax rises, not just spending cuts.”