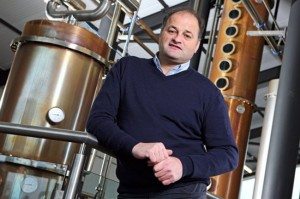 The one-line single minded proposition is your ticket to drive on the media motorway.

Get it right and you get green lights all the way, and infact you can confidently accelerate, almost like you’re in a jet stream. Get it wrong and you can be stopped by every single red traffic light, traffic jammed for miles crawling along at a snail’s pace or remaining totally stationary altogether.

If the single-minded proposition is your tree anchored by the roots of your back story, all your content in the form of subsequent stories are the branches that stem from it.

It’s what William Chase, the founder of Tyrrells Crisps and Chase Vodka calls ‘The Magic’.

Literally, it’s like Ali-Baba And The Flying Magic Carpet. Get on and you effortlessly take off, seemingly without a care in the world, riding high across the Arabian night sky.

I first worked with William Chase ‘making the magic’ around the exit stage of Tyrrells crisps in 2008 which he sold for £40 million. This sale overlapped the early growth phase of Chase Vodka, which sold for an estimated £80 million to Diageo in 2021.

I came up with and deployed the narratives about Chase ‘selling vodka to the Russians’ around the time of the Football World Cup after Chase won the San Francisco World Spirits Competition for ‘world’s best vodka’ knocking P Diddy endorsed Ciroc rock off its perch.

Chase is now fully focused on his ‘third coming’, Willy’s Apple Cider Vinegar, getting people hooked on a daily dose of Willy’s to keep the doctor away and boost immunity. In this ‘virus world’, that’s certainly ‘of its time’.

He’s pondering how to best position and reignite his back story so it breathes life into Willy’s Apple Cider vinegar.

Chase’s personal story as a farming entrepreneur has always cross-fertilised first his potato crisps business followed by the potato vodka business – selling the provenance and craftsmanship of the brands.

William Chase positioned himself as an Everyman anti-hero. A fighter. An overcomer of obstacles.

But that’s only part of the single-minded positioning.

The other part, which creates ‘The Magic’, is the strap-on, change-out component, the ‘campaign’ that adjusts the single-minded proposition to the media market – the mood and temperature of the time, but more importantly, allows you to fill a position not already owned by someone else.

Get it right, and it means you can personify and fill a market gap and get lift off because there’s space for you to occupy.

Diet Coke is a brand with grounded, solidified somewhat static brand values. So the ‘Kate Moss for Diet Coke’ is the sub-plot or campaign which has a short life span and is changed out.

If your personal brand is Harrods, then the subplot or ‘campaigns’ are the ever-rotating dazzling window displays that create interest and maintain freshness.

So the two, the X and Y chromosome are one. The X is the anchor. The Y is the market adjustment and filler of a gap.

It can become a bit like a chess game played with a suck it and see attitude.
Market testing can take a while before something finally gels. The agar growing on the jelly.

William Chase found the gap in terms of his single minded-proposition but adjusted to the market mood, as the antithesis of the BBC Dragons’ Den multimillionaires all showing off about their wealth in documentaries with them jumping out of helicopters in Monte Carlo and magazine interviews showing off their car collections back in 2006 and 2007.

Chase was raw and real and quite literally ‘down to earth’ and ‘down on the farm’.

He cut to the chase, revealing how he had filed for bankruptcy at the age of 32 when he had problems harvesting the potato crops. He was happy to be this real and honest and gritty to anyone that would listen.

Rather than keeping his bankruptcy a guilty, hidden secret, Chase zeroed in on it as his subplot or ‘campaign’ and created a positioning – sharply in contrast with the multi-millionaire Dragons.

He wasn’t a ‘me too’ entrepreneur like the Channel 4 Secret Millionaires chasing the coat tails of the Dragons but positioned as the antidote to the gratuitous, showy-offy displays of personal wealth. Yes, James Caan had not one but two Rolls Royce Phantoms in his garage! Will Chase was happy on his tractor.

His story truly took off and subsequently the food and drink sections of all the national newspapers followed suit by filling their pages with product PR for Chase Distillery and the features sections with personal profiles on William Chase, the hardworking Hereford farmer.

When you get it right, rather than simply putting out, you get a lot of requests back the other way from journalists trying to keep up. It all starts to build like stoking a roaring fire in winter.

Hertz got famous with the slogan. ‘We’re only Number 2, but we try harder’. They fully accepted that Avis were number 1, admitted it, and then found the gap with their ‘service with a smile’, showing they try harder. That penetrated the media curtain. That positioned them for take-off.

The famous 2011 book of inspiration by M&C Saatchi is called ‘The Brutal Simplicity of Truth: How It Changed The World’.

One particular story in there sums up the importance of positioning in terms of making things fly for either products or people.

‘Every day, a blind man sat on the pavement in Central Park. He had his hat in front of him, begging for money. The sign read:

One day, an advertising man saw his plight. He altered the wording on his sign and the cash started pouring into the hat. What had he done?

‘It is Spring and I am blind’.

Your personal brand is much the same. Just being blind is only one aspect.

The missing component is market adjustment and qualifier. In this case ‘it being Spring’ was the vital component for the blind man to get traction with his audience.

Each subplot, campaign or ‘cartridge’ has a lifespan and then needs to be swapped out at some point once it’s run its course.

Chase can’t create ‘The Magic’ for Willy’s Apple Cider Vinegar by telling the bankruptcy story all over again. It’s been done to death. That subplot in terms of his positioning is over.

Meghan Markle is currently struggling for relevance in the USA as she tries to recycle her victim status at the hands of the ‘nasty racist royals’.

People aren’t wearing it. Not because she’s not presenting it in a believable, emotion-fuelled way, but because she’s exhausted the positioning of being a victim at the hands of the Royal family. It’s run its course and she’s done it to death. She needs something new like the US Presidency to set her sights on.

The change-out subplots can be rapid-burn or slow-burn depending on market forces.

For Las Vegas based Entrepreneur Krista Waddell I had a truly golden period when she brought to Britain Ounces2Pounds at the onset of the financial crash of 2007-2008. Reverse tupperware-style parties were ‘of their time’. They had started in Canada and the USA. Krista was the first to bring them to Britain. I had Krista interviewed on BBC business shows as an innovator. Loads of Me too copycats launched and started getting press traction eventually – generally as spin-offs from various pawn brokers. But Ounces2Pounds were in first, and maxed out the press. I had them on BBC Breakfast, CNN, The Sun, The Telegraph you name it. Krista eventully melted down £2 million worth of junk jewellery made up of single cufflinks and single gold earrings in Birmingham before leaving the country again. The financial crash was her ‘campaign’ which, bolted on, created her positioning.

You’ll know when its time to develop and deploy something new as your bounce seems to be becoming a little flat.

Madonna has had more media lives than I’ve had hot dinners because she has expertly repositioned her personal brand time and time again with ‘Great resets’ while never removing or eroding the essence of what makes her tick.

The two-pronged ‘single-minded proposition is the key to unlocking the door of media coverage gold. Once you get this right you can proliferate your content and start to push it out into the media marketplace.

Read more:
The single-minded proposition for your media persona isn’t as single minded as you think