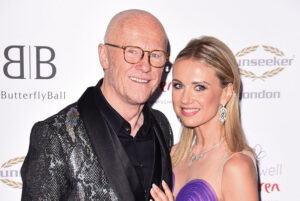 Phones4U Billionaire John Caudwell knows all about creating massive cut-through by throwing his content daggers at the media from well-positioned, multiple release points.

If it’s just you, or your PA, pitching yourself to a TV booker then that’s all well and good for a one-day story.

These days just emailing out press releases into the abyss so often misses. The bespoke, handcrafted calling and leaving messages approach is vital.

Achieving a three-dimensional effect for your persona and real image magnitude like a large landscape painting in the sky, means utilising multiple release points.

You need plants everywhere to send in your daggers.

Eventually, with enough plants, you circle the cowboy with all the Indians positioned from down low and also up on high. Everyone appears to be talking about you.

For his personal PR, which of course mentions his John Caudwell personal brand all the way, he has hired Claire Powell from The CAN Group, who used to represent Katie Price and Peter Andre. So a proper celebrity agent/PR as opposed to a financial or corporate PR specialist.

But then for his just-released autobiography, Love, Pain and Money: The Making of a Billionaire, the press relations will be led by publicists at the publisher, Mirror Books, which is part of Reach Plc, who also own the Daily and Sunday Express, Daily Star and Daily Star Sunday and OK! Magazine. The press unit of Mirror Books would have constructed their own release about John Caudwell’s book and issued it to the media. Technically both The CAN Goup and the publicists at Mirror Books and Reach Plc could have both been pitching the media simultaneously.

There’s been situations where I have represented an individual business person, then the production company of a particular programme they have starred in has been pitching their own press release as well, then the publicist on the TV network the programme has been playing has also been at it.

You can have a rugby scrum of PRs working the same sort of content about one particular individual up into a frenzy.

Caudwell’s charity, Caudwell Children, which receives all the proceeds of the sale of his autobiography, will have it’s own communications team as well – totally separate to the book publisher, separate to The CAN Group. The common element here is of course the personal image of ‘John Caudwell’.

John Caudwell’s image collateral goes through the roof as more and more agencies handle their own communications but with ‘John Caudwell’ at the centre of it all.

When Caudwell owned Phones4U, well before he sold his majority stake for $2.8 Billion in 2011, and then unloaded the remaining 25% for a nifty $272 million, and arguably Phones4U’s competitors conspired to put it out of business, an entirely separate communications team would have handled the press releases but so often quoting John Caudwell.

As well as a PR entourage around your various business interests, there are plenty of other ‘agents’ that can be engaged to further disguise your mechanics.

Freelance journalists are vastly underestimated. They sit somewhat in a grey area between PR and journalism. Because they’re not fully ‘on staff’, they can be more persuaded to ‘come up with a story about you’ and pitch it to a national media outlet as if they have discovered a story.

News and picture agencies also create a perception of impartiality. If they write it up, they will put their story up on an approved news wire which is regarded way up the food chain in terms of its credibility rather than a bog standard press release which smacks of being from a vested interest.

The only thing binding everything together is the news index date which brings all the various communications strands together around an anniversary day, or report release date.

Everyone working on various communications can always slap the same Embargo date on their press releases. That way it aligns everything around a particular date so there are not loads of different campfires being lit.

Having said that there’s always ‘fire bursts’ going off randomly. Depending on the type of media outlet that runs, various media outlets can copycat the story that’s just run, writing their own variations of it.

One thing about the media, nothing is linear.

As long as a story has been reported in a particular media outlet, the same story can be presented as news up to 6 months late.

When Chase Vodka won the World’s Best Vodka award at the San Francisco World Spirits Competition in May 2010, I had BBC Breakfast go up to William Chases’ farm in Hereford right away, film as story and put the story on air. Then Fox News did the same three months later. CNN did it 3 months after Fox. All reported ‘Chase wins world’s best vodka’ like it was a breaking story.

Read more:
The assault on the media by throwing multiple daggers is best handled by orchestrating multiple release points – Phones4U Billionaire John Caudwell knows all about this