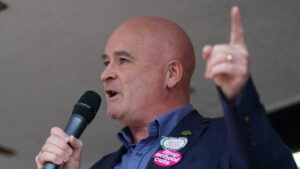 Rail passengers will face further disruption across Britain at Christmas after the RMT union announced a series of 48-hour strikes in December and January.

Thousands of members of the RMT working for Network Rail and 14 train operating companies will strike on 13-14 and 16-17 December, causing disruption over six consecutive days in the run-up to Christmas. There will be a further two strikes on 3-4 and 6-7 January.

The RMT also announced an overtime ban that would cover the Christmas period from 18 December until 2 January. Network Rail and train operators were set to meet to discuss the impact of the ban, which would mean crew not working on rest days over the festive period, when services will already be impacted in some areas by engineering works.

The strike includes crucial signalling staff, whose absence is likely to mean only a minority of services will run on main lines while smaller lines will have no trains at all. Previous strikes have left about 20% of scheduled trains running between 7am and 7pm on strike days, with significant disruption continuing into the following mornings.

The RMT general secretary, Mick Lynch, said: “This latest round of strikes will show how important our members are to the running of this country and will send a clear message that we want a good deal on job security, pay and conditions for our people.

“We have been reasonable, but it is impossible to find a negotiated settlement when the dead hand of government is presiding over these talks.”

Lynch said he had been told by the train operators’ lead negotiators that they had been blocked from offering a potential deal by the Department for Transport. The RMT boss was due to meet the new transport secretary, Mark Harper, on Thursday. He said there was still time for the government to act to head off action.

“In the meantime, our message to the public is we are sorry to inconvenience you, but we urge you to direct your anger and frustration at the government and railway employers during this latest phase of action,” he said.

“Working people across our class need a pay rise and we are determined to win that for our members in RMT.”

Tim Shoveller, Network Rail’s chief negotiator, said: “No one can deny the precarious financial hole in which the railway finds itself. Striking makes that hole bigger and the task of finding a resolution ever more difficult.”

Shoveller said progress had been made in talks over the last two weeks, adding: “We will not give up and hope that the RMT will return to the table with a more realistic appreciation of the situation.”

Warning of more strikes came on Tuesday when the union accused rail bosses of reneging on a promise to submit a written offer at the end of two weeks of talks. It ended hopes of a breakthrough in the long-running dispute over pay and working conditions, after a series of strikes scheduled for early November were called off at the 11th hour.

A separate strike by train drivers in the Aslef union will also halt many services this Saturday, 26 November.