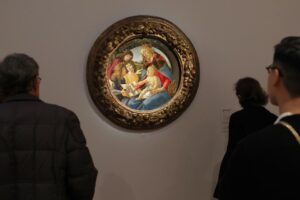 The sale was billed as “the largest and most exceptional art auction in history”, which experts agreed was not an exaggeration.

It did not take long for such a bold prediction to be fulfilled, as the Christie’s auction of a staggering collection belonging to Paul Allen, the late Microsoft co-founder, broke records in New York, fetching $1.5 billion and becoming the biggest art auction ever held.

All were record prices for the artists, according to Christie’s, and a peak in the booming high-end art market. The previous record was set in May for the sale of the Macklowe Collection, which raised $922 million.

Excitement rippled through the art world when it was announced that Allen’s collection was going under the hammer. With pieces spanning more than 500 years, he spent the best part of three decades building his collection, which included more than 150 works by artists such as Renoir, Botticelli and David Hockney.

Victoria Burns, a Los Angeles-based consultant, was one of the few art world figures to be invited to a private preview. She revealed that even the experts were amazed by the works for sale. “It’s very rare to see this quality of work outside of museums,” she said, adding that Allen’s collection was unique not only for its outstanding quality but for the diversity in the eras and styles it contained.

“Paul Allen was a very educated collector and didn’t just buy big names — he bought the best of certain artists,” she said. “Some collections have a strong focus. This one was diverse in terms of centuries and decades because he collected classic impressionist and modernist material through to contemporary art. That’s unique . . . someone who was looking at great art but not necessarily focusing only on one period.”

Allen co-founded Microsoft with Bill Gates in 1975 and became a serious force in the art-collecting world after being inspired during a visit to Tate Britain, in London, where he was captivated by JMW Turner’s seascapes and Roy Lichtenstein’s pop art. He lent works to museums around the world and spent millions of dollars boosting the art scene in Seattle, his home town.

Allen died in 2018 at the age of 65 after being diagnosed with non-Hodgkin’s lymphoma. His sister, Jody, has since managed his estate and the proceeds from the auction will go to charity, as Allen wished.

Burns said the sale may represent the last of its kind because in today’s hyper-competitive art market it is almost impossible for a single collector to repeat Allen’s achievement. “One has to recognise a connoisseur’s eye,” she said. “I can’t think of anyone who was this disciplined and connected; to be able to find and acquire these works, because access in the art world is one of the biggest issues.

“Having the best dealers in the world offering him the best work in the world is unique. And there are so many more players today than there were when he was buying — I don’t know who could do that at this level any more.”