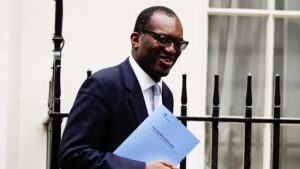 The widely trailed mini-budget of our new Government has provoked howls of protest from the massed ranks of economists and commentators who, until last week, represented conventional wisdom.

Sometimes it is right to kick against orthodoxies – to defy the ‘not how things are done around here’ mentality.

And at long last, HM Treasury is under new management.

Chancellor Kwasi Kwarteng’s revolution in fiscal policy – the way the Government tries to influence the economy through spending and taxation – has finally put Britain on track for a better future.

I am especially pleased by the Chancellor’s abolition of damaging tax measures, including the rise in National Insurance and a planned rise in Corporation Tax.

I also applaud his rethink of the tax status of self-employed workers. The extra red tape proposed by the previous Chancellor, Rishi Sunak, would have made it so much harder for the self-employed and the companies they work with.

The removal of the ‘additional’ top rate of income tax – a damaging symbol of egalitarianism – is welcome, too, as are the promises to go further in future.

All in all, the package represents an excellent first step towards a new era of free trade, deregulation and tax reform.

Not that you’d know it from the wailing noises coming out of Britain’s economic establishment, or much of it, at least.

Exactly the same howls greeted Margaret Thatcher’s monetarist policies in the early 1980s. And well I remember the protestations then, as I was one of her economic advisers.

Forty years on, we know Thatcher was right. She insisted that inflation must be tamed and, despite conventional wisdom, was willing to raise interest rates to 17 per cent to ensure that it happened.

It was brave. But it worked.

We have had more than a decade of failed economic ‘new dawns’ that have only served to pump Government cash into an underperforming economy, leaving us with spiralling costs and double-digit inflation, the highest for a generation.

Austerity – cutting spending to balance the national books in the immediate term – has not worked. And that is why we must now stimulate the economy with tax cuts funded by extra borrowing.

It is only a blinkered orthodoxy that refuses to see the value of this approach. The ferocity of the attack on the Chancellor’s change of direction – largely from those responsible for keeping us locked in austerity for years – has raised fears that a crisis in ‘market opinion’ might yet derail things.

Such fears are groundless, however. Our Cardiff University research group’s current forecast for next year is that inflation will fall to around five per cent, and interest rates peak at three; most other forecasts are similar. We think growth will be a bit over two per cent, with this mini-budget putting recession to flight. As new beginnings go, it’s encouraging.

Given these forecasts, we should expect to see the pound fall – as it has done – not least because the US and euro interest rates may well rise by more than ours. And, in the longer term, sterling may need to fall still further to boost our exports as GDP growth raises our imports. But we can leave all this to the market to decide.

In short, there is nothing here to frighten us. As the Chancellor emphasised in his address, maximising growth has to be the aim for the good of the nation.

Growth makes the average household better off, and so provides resources via taxation for benefits and public services, not to mention fresh public investment.

But this will not happen by itself. It is for politicians to create the conditions for growth. It depends on the right environment, and the right taxes and regulations.

Growth comes from businesses innovating and investing in the resulting improvements. And to get this growth, the businesses and workers must benefit.

They must be helped to make money from their efforts. We must, in other words, reward the entrepreneurs, the risk-takers and the plain hard workers who drive the economy forward.

The last Government that aimed wholeheartedly to do that was Mrs Thatcher’s. Unfortunately, since then, the environment has become significantly less helpful.

We have seen rising marginal tax rates on entrepreneurs and a huge encrustation of intrusive EU regulation across the economy.

Yet thanks to the Chancellor’s policy revolution, Britain is rallying once more.

One focus of Kwarteng’s critics – those who have already written off his measures as being ‘kami-Kwasi’ – has been the large borrowing required to fund his measures. This, they say, even raises fears of public insolvency – that the nation will go bankrupt. But no. Kwarteng has made it clear our spending ‘coat’ will be fashioned according to the cloth available from growing tax revenues.

Another complaint is that his stimulus measures – tax cuts and borrowing – will drive inflation and interest rates even higher.

But this is not what I, or other forecasters, think is remotely likely. Rather, it is a figment of the imagination of a lazy consensus that has grown complacent through lack of challenge.

For far too long, successive governments have confined themselves to short-termist financial rules: a slavish devotion to keeping national debt below a certain figure, or to having the nation’s books perfectly balanced by the end of a business cycle.

It meant that government lost sight of the role borrowing can play in allowing growth-friendly tax cuts and public spending that, properly controlled, will stabilise the economy over the business cycle – which is to say, the medium term.

If successive chancellors, from George Osborne to Rishi Sunak, had acted to support the economy with higher spending and lower taxes following the 2008 financial crisis, the Bank of England would not have carried the full burden of stimulating recovery ever since. It would have avoided pushing interest rates down to zero, and flooding the markets with additional money via ‘quantitative easing’ – a situation that damaged savings and kept zombie firms clinging on, losing us productivity gains.

The ‘supply-side’ role of the Treasury – keeping taxes low and business-friendly – had been utterly squashed by the conventional fiscal rules that were rightly binned by the Chancellor on Friday.

And whatever the Treasury has claimed for the past ten years, borrowing is a key instrument of policy that allows the Government both to pursue the right tax policies for growth, and to act as a stabiliser of the economy at the same time.

Kwarteng’s revolution has not come a moment too soon. Policy has long been on the wrong track, with our economy suffering badly.

Read more:
Ignore the howls of protest: It’s right to reward the risk-takers and the hard-working