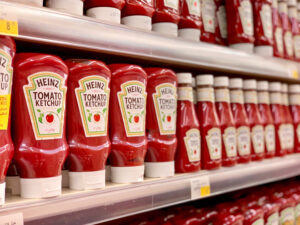 The prices of many big brand foods have soared over the past two years with one top product doubling in cost, a study has revealed.

Millions of shoppers have been switching to supermarket ‘own label’ food and budget chain products because of surging prices.

Research looking at average prices across leading stores found the price of Heinz Tomato Ketchup was up by 53 per cent. The 460g ‘squeezy’ version of the ketchup is currently £2.80 in Tesco but prices vary among retailers.

Meanwhile, Dolmio Lasagne Sauce (470g) rocketed by 47 per cent – but the increase at one retailer was a staggering 107 per cent. The study of big brands by consumer group Which? found Heinz Classic Cream Of Chicken Soup (400g) went up by an average 46 per cent.

The price of a pack of Twinings Everyday 100 Tea Bags leapt by 17 per cent on average – but the figure at one retailer was 64 per cent.

Which? head of food policy, Sue Davies, said: ‘Our research shows the shocking rate of inflation on some of the nation’s favourite branded foods, which is much higher than the national average.’

She added that the trend ‘highlights why it is so important for retailers to provide people with a choice of product ranges’.

She stressed: ‘Supermarkets must ensure budget lines for healthy and affordable essential items are widely available across their stores.

Promotions should be targeted at those most in need and people supported so they can easily compare the price of products to get the best value.’

Read more:
Heinz signature tomato ketchup soars in price by 53 per cent as millions switch to supermarket ‘own label’ as cost of living crisis bites