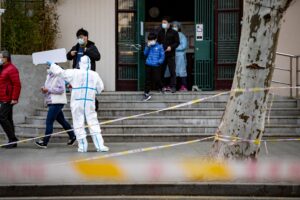 Fears of tougher restrictions have reignited across China today, after the country recorded its first Covid-19 death in six months.

On Sunday, an 87-year-old man in Beijing died as infections across the country spike.

Beijing has in recent days moved to confine some residents to their homes and ordered others to quarantine centres.

Investors had been hopeful of a gradual reopening after Beijing eased a number of Covid-19 measures earlier this month.

Last week, China announced that it was relaxing some of its ‘”zero-Covid” policies, such as suspending flights from airlines that had brought a certain number of passengers who tested positive.

Officials also trimmed the time required in quarantine for international arrivals from seven to five days.

The southern Chinese city of Guangzhou locked down its largest district earlier today, as it tries to tame a major coronavirus outbreak.

The city has told residents they must present a negative test if they want to leave their homes until Friday.

The Baiyun district in Guangzhou also suspended in-person classes for schools and universities.