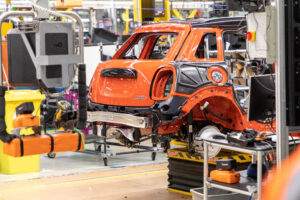 Electric Mini production is to be shifted from the UK to China in a fresh blow to Britain’s ambitions for a green car industry.

The brand’s German owner BMW said it is planning to halt production of the electric cars at its Oxford factory next year, despite the city’s status as the historic home of the Mini. Stefanie Wurst, the new head of the marque, said the factory was “not geared up for electric vehicles”.

Speaking to the Times, Ms Wurst said “Oxford will always be the home of Mini”, but that the facility needed “renovation and investment”. BMW has been making Minis out of the Cowley site, on the outskirts of Oxford, for around 60 years.

It will come as a major setback for Britain’s hopes to lead the electric revolution following government pledges to create hundreds of thousands of jobs in the industry.

Honda pulled back from making its electric cars in the UK back in 2016, opting to instead build them in Japan and shuttering its Swindon factory, resulting in more than 3,000 job losses.

When BMW had announced it would be making the fully electric Mini E at its Oxford plant in 2017, it was seen as a significant vote of confidence in Britain’s car industry – one which guaranteed the future of the 4,500 staff at the plant.

At the time, sources had said there was no doubt that BMW would pick Oxford to make the electric Minis. A spokesman for the company said: “The business case for Oxford is the best one on offer given current economic and trading conditions.”

However, the latest update suggests that BMW might not be making electric Minis at the Oxford site until the next decade. When asked by the Times on when electric Mini production would return to Oxford, Ms Wurst said there was “no date”.

The latest decision to switch production overseas follows significant pressure on the sector amid a recent shortage of microchip parts, which disproportionately affect electric vehicles.

Earlier this year, production at the Cowley factory was suspended for a week, due to a global squeeze in the supply of computer chips, which are vital for functions including reversing cameras and fuel efficiency equipment.

Electric car makers have also been wrangling with higher prices for battery components such as lithium, nickel and copper.

Ms Wurst said the decision to switch supply to China had not been taken because of post-Brexit supply constraints, but because the company was facing inefficiencies by making both electric and petrol cars on the same line.

Demand for electric cars has been on the rise, according to recent figures from the RAC, with around 14pc of drivers planning to swap out their diesel or electric cars when they next buy a vehicle.

However, the RAC said cost-of-living pressures were prompting many to delay purchases, as they face steeper energy bills and grocery bills.

The higher electricity prices have also meant electric cars are more expensive to run. Analysis from EY suggested that petrol and diesel cars will now remain cheaper to own until well into the second half of the decade.

BMW said: “In the next generation of Mini, Oxford will build the Mini Cooper three-door and five-door Hatch models and will also gain the Convertible, currently built in Holland. Electric Minis – a hatchback and small SUV – will start their production in China through our partnership with Great Wall, and the electric Countryman will be built in Leipzig.”