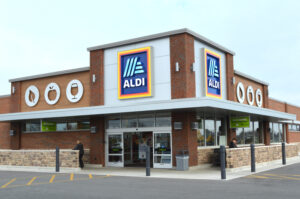 It is a blow to Morrisons, which had been the country’s fourth largest grocer ever since its acquisition of Safeway 18 years ago.

Rampant inflation is prompting consumers to tighten their belts as household budgets come under pressure. This has boosted the popularity of Aldi, which enjoyed an 18.7 per cent jump in sales in the 12 weeks to September 4 that lifted its share of the overall grocery market to 9.3 per cent, according to figures released by Kantar, the research firm.

Sales at Morrisons, which was bought by the American private equity firm Clayton, Dubilier & Rice for £7 billion last year, fell by 4.1 per cent in the period, pushing its market share to 9.1 per cent.

The data is further evidence that consumers are altering their spending habits as inflation bites. The issue of soaring energy prices is rippling through the economy and pushing up the cost of everything from food to fuel. The annual rate of inflation hit a 40-year high of 10.1 per cent in July and is expected to rise further, raising fears the UK economy will slide into recession.

This is starting to affect consumer behaviour, with the boss of The Restaurant Group, the owner of chains including Wagamama and Frankie & Benny’s, saying last week that some customers were ordering less food and drink.

Kantar said that the discounters Aldi and Lidl were benefiting as shoppers went to a wider range of stores for food. Lidl also experienced a surge in sales, which were up 20.9 per cent in the 12-week period and boosted its market share to 7.1 per cent. Tesco remained the UK’s No 1 grocer, with a 26.9 per cent share, followed by Sainsbury’s at 14.6 per cent and Asda at 14.1 per cent.

Fraser McKevitt, Kantar’s head of retail and consumer insight, said: “Back at the start of the 2010s, Tesco, Sainsbury’s, Asda and Morrisons together accounted for over three quarters of the sector but that traditional big four is no more. The discounters have seen dramatic sales increases in recent months, bringing more and more customers through their doors.”

Aldi and Lidl have expanded rapidly in recent years and together now have a 16.4 per cent share of the market. Their growth has been powered by store openings.

By contrast, the estate of Morrisons has stayed relatively stable and currently stands at 497 supermarkets. It also has 330 franchised convenience stores that it does not own and which are not included in Kantar’s data. However, Morrisons’ market share will receive a boost once it completes its deal to buy McColl’s out of administration. McColl’s operates about 1,100 convenience stores, of which about 270 are franchised Morrisons Daily shops.

A Morrisons spokesman said: “Market share is partly a function of new store openings and although Morrisons has not put on any significant new space for a while, some competitors are still opening many new stores. But customers don’t really care about market share statistics; they care about value, quality, provenance and service and that is where our focus is going to remain.”

Giles Hurley, the boss of Aldi UK and Ireland, said: “Shoppers are prioritising value like never before and voting with their feet by choosing Aldi over full-price traditional supermarkets. We are doing everything we can to make food shopping as affordable as possible for millions of households.”